Too many dependents and not a computer program to handle this many on Aetna insurance ??? 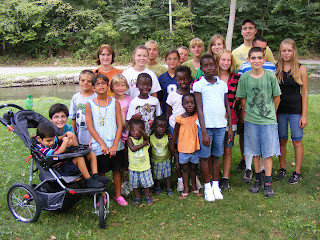 We have had an issue or should I say Aetna- the big insurance giant has an issue with the size of our family....Well they give us insurance and it is good but they don't have a program in their system to be able to name all of our family who is covered. So every so often ( sometimes every 4 to 6 weeks) when we see a doctor, fill a prescription, order therapeutic equipment, schedule a surgery ( remember we have done about 115 surgeries total in the last 10 yrs getting our kids healthy or walking I get a call that the system shows that person has been terminated. This all because for every other family but ours the computer system puts the names of the covered dependents in . For us it would "cost this insurance giant to much to rewrite a computer program to input this information. " Instead one of the employees for Hewitt who is the HR middleman for First Data inputs our family manually...and as I shared they often miss one of us. This causes hours of phone calling on our part. It has also delayed getting a medicine but fortunately all of our medical providers know us well and know of our issue but sometimes it can be so frustrating...it is to the point of being humorous because otherwise we would go insane trying to work it out.

Also our vision insurance only has enough in its program for 10 in a family...so when I take someone for that type of medical I have to call and make sure they are one of the ten and take off someone to make room if they are not. Even to fit glasses.

Tonite Paul was going thru our taxes and he uses Turbo Tax...funny thing this year for the first time after trying for days to put in our dependents he gets an email from them saying they don't have a computer program to allow him to use Turbo Tax because we have more dependents than their program will allow.....  :)

Are we being discriminated against because we are a mega large family ? I mean are there not other families as big as ours...It is hard for me to believe that but since I am on a blog called, Mega Family Bogger and I do know there are at least 2 other families who claim to have more children than we do....
Now I don't think there are as many children still at home as we have or maybe they don't claim them on their  medical benefits but don't you think it is sort of funny or odd ?

Actually we deal with these issues most of the time as just routine. I have learned more about health insurance and the ins and outs of it than I ever knew. Also I have had some really encouraging phone calls with many Aetna receptionists and supervisors sharing about our family and our faith...so now I wonder who the Lord will bring to us thru Turbo Tax?   :)

Just for the record we claim 22 dependents and there are 28 of us on our medical plan.
Posted by mommajeane at 10:02 PM

This post makes me so happy that I live in the UK and have the NHS!