Remembering our first adoption in 1985 when we traveled to Mexico.... 31 yrs ago - Abraham's Story 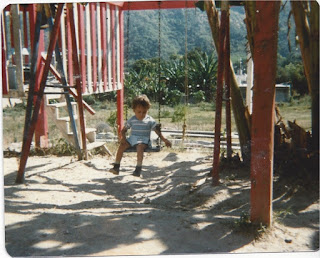 This was our Abraham loving to sit on the swing in the front of his orphanage. 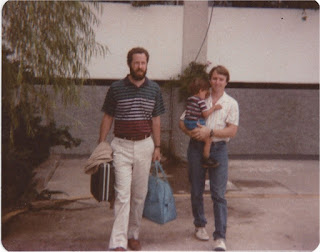 Ken Silver was a dear friend who traveled with us to help facilitate getting Abraham getting out and into our family. When Abraham was around 2 he suffered a beating where both legs were broken and he was in a body cast. He is also blind . 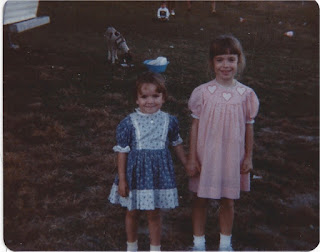 We took our oldest daughter, Laura Jeane who was 6 yrs old with us. 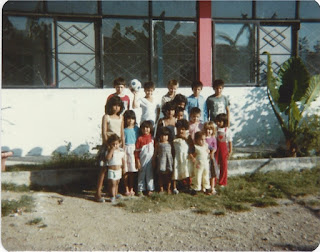 Some of the children in front of the orphanage 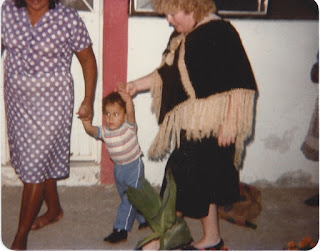 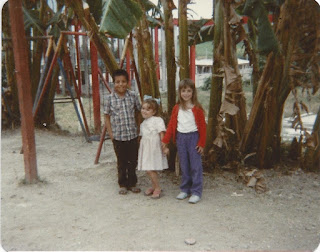 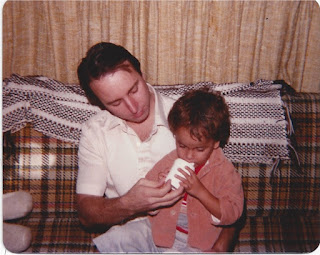 Paul helping Abraham get a drink. 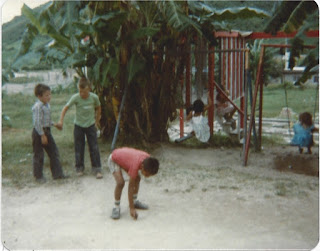 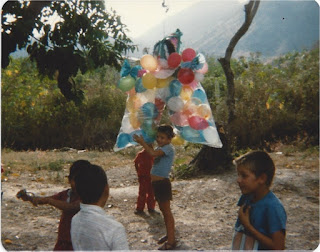 A birthday party for one of the children - complete with a real Mexican piñata . 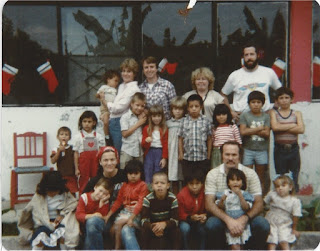 Group picture taken on our trip to pick up Abraham... Other couple there are Dave and Judy ( missionaries ) and a young woman also a missionary. 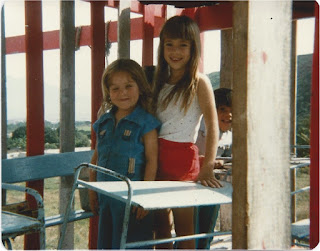 Laura Jeane connected with several of the children but this little one was a favorite of ours. 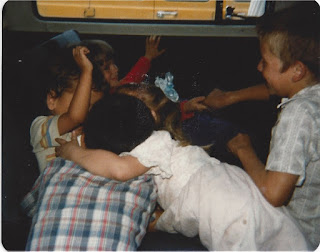 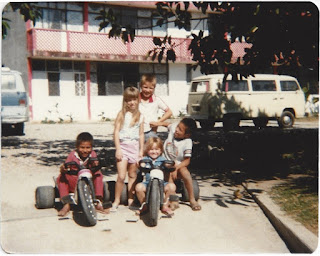 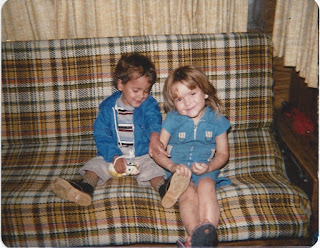 She was special to Abraham as well. 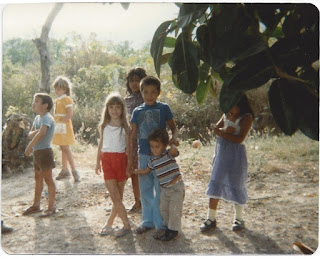 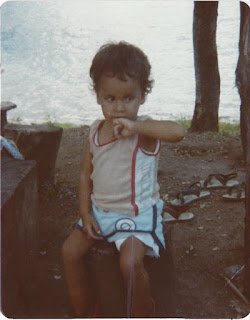 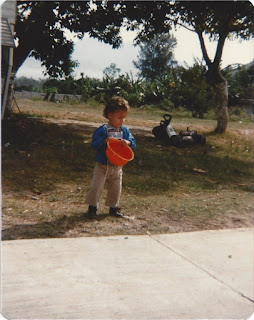 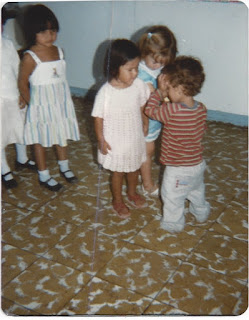 The kids would line up in the dining area and sing praises to Jesus. Even our little Abraham did this. 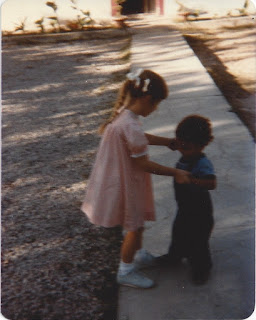 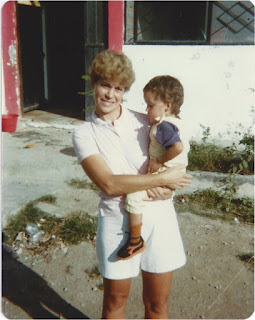 This is me holding our Abraham. Saying goodbye to him in October of 1985 but returning in December to bring him home on a medical visas. I was just 26 yrs old...We had Laura Jeane, Jennifer and Molly - ages 6, 4 and 2. 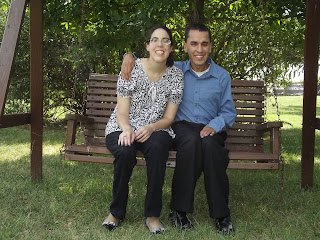 Here is Abraham with his beloved, Dee Anna now. All grown up 33 yrs old. 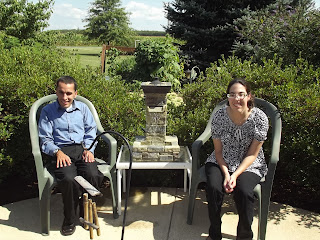 Paul and I had 3 girls and I was pregnant with our 4th child the year before I traveled to Mexico. I lost the baby and we were devastated by the death of our baby. However, months later I heard of a mission trip to Mexico that our church at the time supported. If I had been pregnant I would not have traveled to Mexico . Even though I was terribly sad about losing our baby I can now see how God moved in that situation to allow me to travel and adopt Abraham. I could not see or say this during that time of my life. I had to choose to move forward from my grief and loss to the next journey the Lord gave to us...which was our adoption of Abraham.

I traveled with the team in October of 1985. It was during a preparation meeting that I learned of a little boy who was blind. He had suffered a beating months before. Paul and I prayed about adopting him and began the process to adopt. We got our home study done in an amazing timeframe and for just 500 dollars. We were originally going to continue with his adoption until we learned of 2 more times where his life was in harms way...So we prayed and God told us to travel in December of 1985 to bring our son home. We decided to bring him home on a medical visas. We had no idea how God was going to bring Abraham home but we had no doubts He would.

We left the Friday after Thanksgiving and it was amazing how God made it all come together. He provided a wealthy , Mexican couple who had helped the orphanage before. They were moved to help us to get our son home . The De Lemora Pena's traveled with us to obtain a passport and a miracle happened - we got it when we should not have . Then we went to the US embassy and were able to obtain his visas to travel to the US. There were too many mountains to climb over and too many obstacles that got in the way but we saw the Lord work thru each and everyone that I never had any doubt we would be bringing my son home. Our trip took just 10 days including our 2 days of travel. We arrived home with Abraham on December 10.

Our anniversary is on Dec. 19. My dad came up to watch the kids while Paul and I went out to dinner. Abraham had been listening to Christmas music the 9 days he had been home and he was singing all the carols in perfect English...this was our first sign that Abraham had an amazing talent and gift for music. We had given him his birthdate so he was just under 3 yrs of age.

Abraham has perfect pitch. He can play any instrument and long pieces of music, and any song he hears once. He has a gentle spirit and a quiet faith. God brought his girl friend, DeeAnna into his life 9 yrs ago at our church. He adores her and their love is shared by a love for the Lord. They have a simple but fulfilling relationship even thru the struggles each one has. Abraham suffered a frontal lobe injury during his beating in the orphanage. This causes him to not be able to recall things at times. He forgets even that he is hungry...so he is not able to live independently. The music part of his brain was not affected . He plays for events in our area like weddings, church gatherings, nursing homes community events. Once when he answered in his journal , "If you can have anything at all what would it be ? " We thought he'd write about getting his eye sight back. Not at all . He wanted a baby grand piano. That tells you a lot about his soul...which is music and his faith.

We recently went to a retirement party for his music teacher in early elem. school ( before we home schooled him ). I heard 2 stories about him that made me so very proud. One was told to us by another teacher. A storm was coming up and the kids were all huddled in a room. They lost their electricity and it was dark. Kids were screaming and crying and Abraham who lives in the dark because he is blind got them all to pray and things calmed down. His music teacher , Mrs. Hall shared at the end about diff. things during her career with children. She said she prays for the children but only once did she have a student who left her room every day and told her he was praying for her...she was talking about Abraham. When they had Halloween parties he dressed as the " Holy Ghost " ( a sheet with holes cut out of it ). When asked what he was he got to share his faith. This was  in early elementary school.

God has always had his hand on our son, Abraham. I am so glad that He chose us to be his forever momma and daddy. Now he is the oldest son with 35 siblings. We never thought we would be in this journey of life but what an awesome God we serve.
Posted by mommajeane at 11:23 PM

Abraham is very lucky, you can see it on his face. He has such a loving smile.

Amazing that is such a long time ago, and still so fresh in memorie for you, I think Abraham and 1 are born in the same year. 1983. But I am from September.