Time for an Andrew update :) 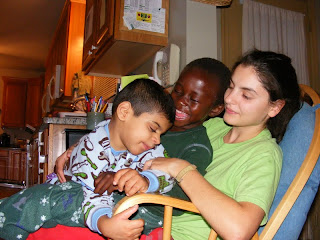 Even his new brother, Isaiah loves him..... 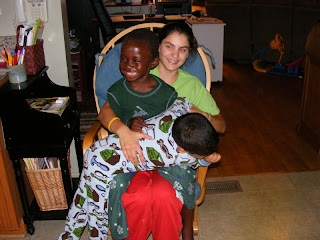 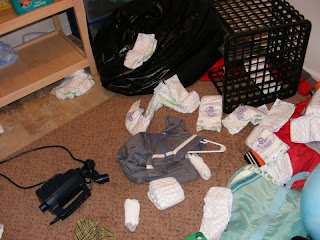 This is how we found his room this am...Guess what he has figured out ? How to get out and back in to his bed...stinker. 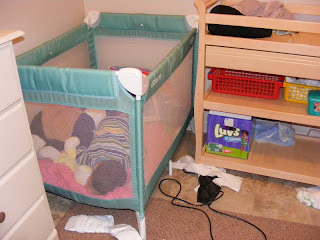 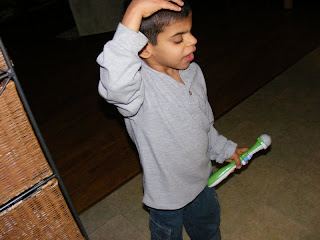 He is so mobile now. It is amazing and we are busy keeping up with him. He loves to go all around the house...He can open doors and let himself into areas that he wants....and when he knocks things over he does the biggest laugh...even if it is something he broke...even more giggles. So we watch him like a hawk now....but it is a great thing to see. He is walking , trusting and interacting with his enviromnent- Yeah! 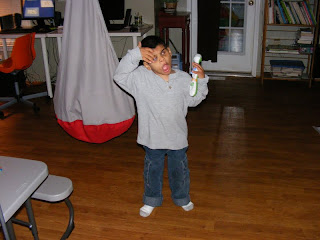 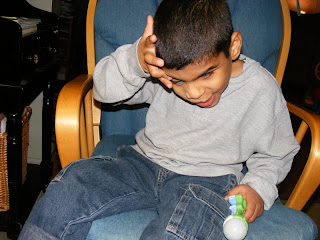 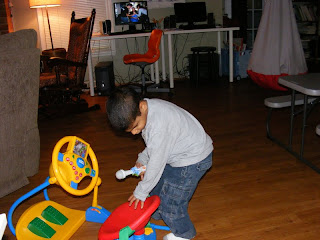 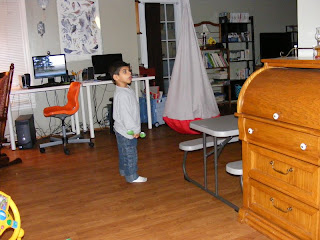 He has preferences and can find them even when we think he would get mixed up and not be able to. We also took him to a new GI specialist and I am happy to share that he is doing super with his eating, vomiting and GI issues. I had Joseph, Cate and Rachel meet me at Johns Hopkins when Anna had her surgery.  They brought Andrew and Lila down. Rachel stayed with Anna while the rest of us went for our appointment . I really liked him- Dr. Karnsakul. He explained things well to me about why he is still vomiting- He believes it is the acid Andrew produces that caused him to vomit after he was over the H. Pyloria. He also thinks that he is over it with the tests we did that were negative- Praise God for that. He also told us we should not stop the previcid abruptly like we did because the cells that produce the acid are smart and they will produce more acid the next day...we needed to wean him off of it and then go to Zantac and wean off that. So we started on the Zantac since he was already off the previcid...He took it once a day for a wk. but had a few times of throwing up so we had to do it twice a day and then we will eventually wean him off of it...and the best part is it seems to be working and we can all tell in the past week he seems a whole lot happier !!!!! Also Dr. K had a very good reason as to why he did not start vomiting until he was home with us for 8 months...He said that our flora changes if we change the area we live in...So coming from a diff. country, Bulgaria and moving to America his flora ( natural bacteria ) changed and it irrated his GI tract and the H. Pyloria which we all can have and not show symptoms started to just that- be symptomatic. I always knew the first GI specialist was just blowing us off about this and I am so glad we changed doctors....I have done this before with some of the kids and it has always paid off to go with my momma's gut feeling about stuff ( no pun intended ) .

Next week we are having an evaluation done on him at our home with the local school system. They are coming to also do an evaluation on Gracie. We met them 2 weeks ago and we are excited to see what they have to say. Home 1 yr and 9 months and how much he has changed...He is now a happy guy most of the time instead of being very unhappy. I am sure his GI issues contributed to his discomfort and now that we are on the road to getting it taken care of he has been so happy.
Posted by mommajeane at 8:06 PM

I love Andrew updates. I think he is such a cute kid! I'm glad to hear he is doing good. He looks happy.

I love that he travels so well now! The in and out of bed thing... May God give you witty invention! =) He is a doll.

Thanks for sharing this update. Nathan is being re-tested to see if his H. Pylori is gone, upper GI, prevacid, swallowing study. Trying to find out why he vomits so much still and won't eat solid food. No one mentioned the weaning of the prevacid..we stopped it as directed when the h. pylori meds stopped. Thanks for sharing this tidbit. Hope Andrew continues to feel better and better!! Blessings, Jennifer